The information on willowtreeherbs.com as well as in this statement itself has not been evaluated by the Food and Drug Administration. The products contained herein are not intended to diagnose, treat, cure, or prevent any disease. All information provided is for educational/research purposes only. For full details, click to view our disclaimer.

Juniper Smudge is made from the boughs of Juniper trees, which are coniferous plants in the genus Juniperus /dʒuːˈnɪpərəs/ of the cypress family Cupressaceae. Depending on taxonomic viewpoint, between 50 and 67 species of juniper are widely distributed throughout the Northern Hemisphere, from the Arctic, south to tropical Africa, from Ziarat, Pakistan east to eastern Tibet in the Old World, and in the mountains of Central America. The highest-known Juniper forest occurs at an altitude of 16,000 feet (4,900 m) in south-eastern Tibet and the northern Himalayas, creating one of the highest tree-lines on earth.

Junipers vary in size and shape from tall trees, 20–40 m (66–131 ft) tall, to columnar or low spreading shrubs with long trailing branches. They are evergreen with needle-like and/or scale-like leaves. They can be either monoecious or dioecious. The female seed cones are very distinctive, with fleshy, fruit-like coalescing scales which fuse together to form a “berry“-like structure, 4–27 mm (0.16–1.06 in) long, with 1–12 unwinged, hard-shelled seeds. In some species these “berries” are red-brown or orange but in most they are blue; they are often aromatic and can be used as a spice. The seed maturation time varies between species from 6–18 months after pollination. The male cones are similar to those of other Cupressaceae, with 6–20 scales.

In some species (e. g. J. communis, J. squamata), all the foliage is of the juvenile needle-like type, with no scale leaves. In some of these (e.g. J. communis), the needles are jointed at the base, in others (e.g. J. squamata), the needles merge smoothly with the stem, not jointed. The needle-leaves of junipers are hard and sharp, making the juvenile foliage very prickly to handle. This can be a valuable identification feature in seedlings, as the otherwise very similar juvenile foliage of cypresses (Cupressus, Chamaecyparis) and other related genera is soft and not prickly.

Juniper is the exclusive food plant of the larvae of some Lepidoptera species including Bucculatrix inusitata and juniper carpet, and is also eaten by the larvae of other Lepidoptera species such as Chionodes electella, Chionodes viduella, juniper pug and pine beauty; those of the tortrix moth C. duplicana feed on the bark around injuries or canker.

There are no reviews yet.

Be the first to review “Juniper Smudge 5″” Cancel reply 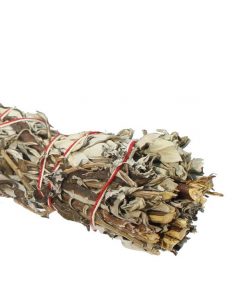